How is India dealing with environmental risks and climate change? 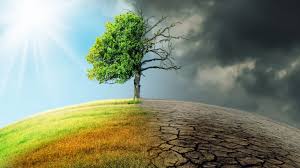 Environmental health and ecosystem vitality are fast becoming key concerns in India.  The country is grappling with an array of environmental problems related to air and water pollution, as well as inefficient or non-existent waste management system. India has also been witnessing some extreme natural events that threatened lives and crippled economic activity.

Most recently, while Chennai was praying for some rain, Mumbai was facing a severe deluge. In 2018-19, as many as 2,400 Indians lost their lives to natural disasters such as floods and cyclones, according to the Environment Ministry. These events did not occur solely as a result of nature’s vagaries; it has been proved that climate change is playing a major role here. Climate change has led to disruption of ecosystem services, loss of biodiversity and breakdown of traditional livelihood systems across different geographies and regions of the country. It is also adversely affecting food production, as well as water and energy security across India, threatening to disrupt the current pace of social and economic growth enjoyed by the country.

Besides climate change, there are several other factors that contribute to the problem. A recent study by the Central Water Commission found that 42 rivers in India have at least two toxic heavy metals in quantities beyond the permissible limit. Ganga was found to be polluted with chromium, copper, nickel, lead. Six other rivers had unacceptably high concentrations of four pollutants. The major sources of heavy metals in India are industrial waste from mining sites, manufacturing and metal finishing plants, domestic wastewater and run-off from roads. Many of these trace metals are highly toxic, such as mercury, lead, iron, copper, cadmium, nickel, arsenic and tin.

Also, agriculture often contributes to a range of environmental problems in India, including deforestation, loss of biodiversity and eutrophication. Eutrophication happens when excess nitrogen run-off from over-fertilisation causes algal blooms, loss of oxygen from the water, and the death of aquatic animals in river systems. Instances include mass fish kills in the Dhanas Lake in Chandigarh, Ulsoor Lake in Bangalore and the Yamuna River in Delhi. In fact, the issue of eutrophication of India’s lakes and rivers is extremely widespread.

World Bank estimates that 21 per cent of communicable diseases in India are linked to unsafe water and a lack of hygiene. Over 500 children under the age of five die every day from diarrhoea alone. However, there are some indicators that the government has begun to address this issue. In 2005, the government established the National Health Mission and introduced structural reforms to strengthen health care and sanitation. The National Health Policy 2017 also spells out the government’s commitment to reforming the health sector and achieving universal health coverage by proposing an increase in the health budget to 2.5 per cent of the total GDP. The policy also sets targets for disease elimination, reduction of premature and preventable mortality, systems strengthening and improving health services.

Meanwhile, a biennial report by Yale and Columbia Universities in association with the World Economic Forum ranked India among the bottom five countries on the Environmental Performance Index (EPI) 2018. The EPI ranks 180 countries on 24 performance indicators across 10 issue categories covering various aspects, including air quality, water and sanitation,

These findings clearly indicate that there is an urgent need for a greater commitment and investment on part of the government and businesses in relation to sustainability issues, such as improving air quality, protecting biodiversity and reducing greenhouse gas emissions. The same report confirms that over three quarters of India’s population are exposed to air pollution that is higher than the recommended level set by the government. The exposure level of those affected by poor air quality is also four times the maximum recommended by the World Health Organization (WHO).

As air and water pollution levels continue to grow across India and the excessive exploitation and depletion of natural resource continues, it is now more important than ever for the government to address these issues. In particular, such issues as air pollution and water sanitation need to be addressed urgently as they severely affect the health of millions of people in the country.