The idea entails phasing out vehicles and creating a 15-minute city in an effort to encourage more self-sufficient urban communities with grocery shops, parks, cafes, sports facilities, health centers, schools, and even workplaces just a walk or bike-ride away. 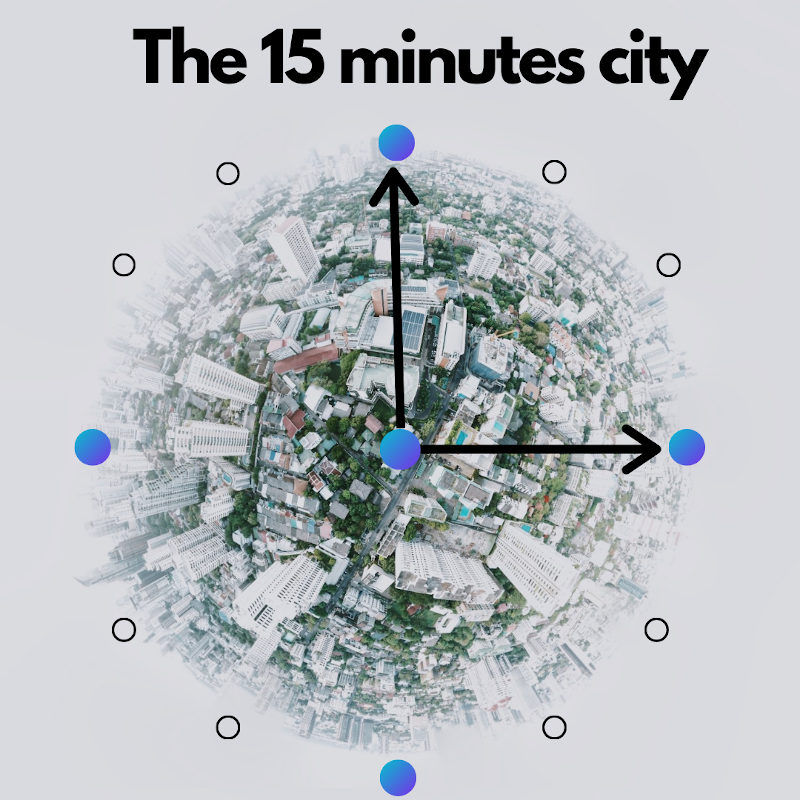 The 15-minute city was popularized by the Mayor of Paris Anne Hindalco who used it in her election campaign. The idea entails phasing out vehicles and creating a 15-minute city in an effort to encourage more self-sufficient urban communities with grocery shops, parks, cafes, sports facilities, health centers, schools and even workplaces just a walk or bike-ride away. Mayor Anne Hindalco termed it as “ville du quart d’heure” – the quarter-hour city – that will offer Parisians what they need on a daily basis at or near their doorstep. The idea aims at an ecological transformation of the capital city of Paris into a collection of neighborhoods. The larger aim is to reduce pollution and stress, creating socially and economically mixed districts to improve the overall quality of life for residents and visitors.

What is New about the 15-minute city?

Carlos Moreno, the brain behind the 15-minute city idea believes that the core of human activity in cities must move away from oil-era priorities of roads and car ownership into a post-vehicle era. “We need to reinvent the idea of urban proximity,” Moreno says. We know it is better for people to work near to where they live, and if they can go shopping nearby and have the leisure and services, they need around them too, it allows them to have a more tranquil existence.

Melbourne has developed 20-minute neighborhoods where everything – shops, schools, parks, doctors – is within a 20-minute walk, a bike ride, or on public transport.

Copenhagen in Denmark and Utrecht in the Netherlands are also cities that have successfully introduced the idea of hyper proximity to fulfill the needs of city dwellers.

Braidwood, located in the southern tablelands of New South Wales in Australia has a public realm composed of its cultural identity, open spaces, and laneways between the buildings, which individually reflect their functional purpose and character of the place.  These spaces evolved slowly, at a human pace and scale in step with the culture that thrives here.

Mark McClelland, Creative Director, writes that life is lived in the street here. The whole town is treated as a public realm. It’s a common joke that a five-minute walk to the supermarket often takes an hour on account of all the social exchanges that take place along the way. People walk in and out of each other’s shops for chats and coffees, the cafés spill onto the street as does the hall on market day, the line between public and private space is permeable (Source: Mark McClelland: What Future for Public Realm in Cultural Capital July 8, 2016, available on http://culturalcapital.city/2016/07/what-future-for-public-realm/ accessed on 20th January 2020).

The pandemic of 2020 and subsequent lockdowns compel us to rethink the ways in which we live, work, and interact. These, in turn, impact human interactions with urban spaces, now largely determined by the widespread use of digital technologies, a move towards cleaner energies, lower carbon footprints, improvement of air quality, sensible use of available resources, lessen depletion and build resilience to impending climate risks. The post-oil era cites that are rolling out in many parts of the world could become reality in India. This of course requires serious revision of our current pattern of bypass urbanization characterized by peri-urban, horizontal expansion of the city with endless production of real estate, commercial, residential, and leisure spaces. In this current approach to urban development driven by large-scale infrastructure projects and privatized gated communities, the human scale can be lost in the quest for size and our techno-mechanistic ability to deliver.  Reclaiming and redesigning of public space and mobility systems, innovative and cheaper delivery mechanisms, greater opportunities for pedestrianization, cycling with the existing urban fabric, measures like congestion tax, and alternative work settings may eventually shift our focus from car dependency and the supply side concerns of building more roads for private transport. We may then look for alternatives to city building other than the car-dependent-urban sprawl. And eventually, move towards a human pace of development that is now considered as not only desirable but imminent. A 15-minute city can then become a reality! Dr. Binti Singh is an urban sociologist and holds a Ph.D. (in urban studies) and an M.Phil. (in Planning and Development) from the Indian Institute of Technology (IIT Bombay), Mumbai, India. She is Associate Professor at KRVIA, Mumbai and engaged in diverse international research programs like Building Resilient Urban Communities/BREUCOM supported by the European Union and academic collaborations like PIVOT supported by the Royal Academy of Engineering, UK. She is also Book Series Editor on Urban Futures with Routledge, Taylor and Francis and Associate Editor with Oxford Urbanists. She has contributed to several peer-reviewed research journals and edited books. Her articles have also featured in Domus India and Business World Smart Cities publications. Her research engages with questions on the built environment, urban policy and governance, urban trends and urban theory.